Adding Lotus to your pool

I’ve spent most of my life and career surrounded by plants, the terrestrial kind. But gardeners, we’re always on the lookout for a new challenge and the steeper the learning curve the better. That’s why early spring two years ago found my husband and me digging a hole two feet deep and six feet in diameter in the center of the ammonite-spiral path through Kim’s Garden. Into that hole we sunk a similar sized galvanized livestock tank and filled it with water. Three days later the brown truck backed down the driveway and “Mary” alighted carrying a box the size of a four-slice toaster. Inside, our entire water garden – two hardy (zone 5) water lilies, ‘Perry’s Baby Red’ and ‘Walter Pagel’, a bundle of purple leaf cabomba for shading, red-stemmed parrot’s feather for oxygenating and a batch of frogbit – lay in a nest of biodegradable peanuts.

And then began the time of miracles as both ‘Perry’ and ‘Walter’ rose from the depths to bloom their first spring, and a small khaki-colored frog, dubbed Henry, took up residence.

Every day throughout the spring and summer, we found reasons to detour around our little pond, admiring the reflection of clouds mirrored in the water, contemplating the ripples from a sudden breeze, clearing the fallen debris from surrounding trees. We’d often come upon Henry having his Zen moment among Medusa’s cast stone strands, placed there for his meditative pleasure and his safe escape from the pool. By the end of summer, he was hosting gatherings of his bullfrog buddies and paramours.

But the chill meeting me as I stepped out the back door put an end to my complacency. Time to ready the pond for winter, and we didn’t have a clue how to go about it.

We consulted the experts – a lot of them, in books and on the Internet – many with conflicting advice. To us, at least, it seemed the companies selling pond plants and equipment supplied the most complete information. We compared, sifted, gleaned, and with winter drawing close decided to pick the instructions that made the most sense and to trust our instincts. And in the end, as often happens, it proved quite simple.

In our Zone 7a, water is not supposed to freeze deeper than a few inches, if that; so after the first hard frost, I pruned the leaves on our hardy water lilies back to pot level. To keep the pond clear of rotting vegetation, we removed the frogbit and composted it, dislodging any of the potato-looking buds we found and dropping them to the bottom of the pool (normally a natural occurrence) to see if they’d sprout the next spring. We left the parrot’s feather and the cabomba submerged.

But what to do about our community of American Bullfrogs in the cold dark days ahead? The answer? Leave them to it. They’d pass the winter hibernating, settling among the pots and vegetation at the bottom of the pond or moving to the nearby creek and sinking to its muddy floor, breathing through their skin. Their own type of anti-freeze – high concentrations of glucose in their vital organs – would help in combating the cold.

We spent the next weeks scooping leaves from the pond and enjoying its wildlife. When the bone deep cold began to creep into our valley, John and I did our own hibernating – inside the house with cups of coffee, a warm fire and a stack of books. 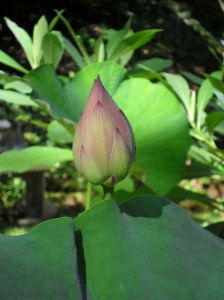 The following spring a longed for lotus joined Henry in the pond; then I decided he needed two – Nelumbo ‘Chawan Basu’ and ‘Gregg Gibson’. I never imagined leaves so iridescent, a bloom so beguiling, so full of mystery. I, also, never imagined they’d grow so big, extend so many leaves. I wondered how Henry and his gang managed to find their way out from under all that luscious foliage. Later, I found evidence the gang had been getting up to a little procreation under the lotus and lily leaves. Our family was growing.

Last fall, we, again, prepared the pond for winter. Or so we thought. Weeks of single digit temperatures, over night and late into the morning, froze the pond to a depth of twelve inches, encasing the largest lotus pot in solid ice. Looking into its depths, I thought of Narnia.

This spring, ‘Chawan Basu’ moved to a new home in a deep pot outside the kitchen door. Leaves emerged. In Henry’s pool, the lily pads rose to settle and float upon the barley-cleared water. Looking down upon ‘Gregg Gibson’, I saw no sign of life. Instead, tadpoles, like so many half-licked Tootsie Roll Pops, bobbed among his decimated stems. Taking a back seat to the Oscars, this show kept us mesmerized for weeks, until first one lily pad after another starred its own froglet. And there between cloven lily pad and streaming frogbit, another kind of leaf – rounder, fluted, bluer – floated. ‘Greg Gibson’, tendril crawling over or under its pot had rooted deep in the sediment at the bottom of our small pond, a survivor after all.